practice self questions and the associated answers

1. What MIGS device features in the following image?

2) A 36-year-old Afro-Caribbean patient with Sarcoidosis presents with high pressure and posterior synechiae. He has a history of recurrent episodes of acute inflammatory episodes in the anterior chamber. What additional precautions would you take in performing an iridotomy?

3) A 66-year-old patient with CLL is referred with trabecular failure. His IOP is 52 despite 1g of acetazolamide and is listed for an urgent trabeculectomy and MMC. At day 1 he develops a slow bleb leak at the conjunctiva-limbal edge with no signs of hypotony maculopathy. What is the first line management regime?

a) Increase frequency of topical steroids.
b) Apply a bandage contact lens and switch the topical treatment to preservative free.
c) Give 1g of acetazolamide.
d) Inject viscoelastic

4) A 25-year-old man reports was playing football and goes up for a header and scores. He celebrates with his team and ends up at the bottom of the team huddle. He noticed blurry vision and presents to eye casualty. He has elevated intraocular pressures and mild corneal oedema in that eye. He has an odd cell in the AC, which increases after you have dilated him. Gonioscopy findings reveal: E40B both eyes, with homogenously darkened TM. What is the most appropriate treatment?

5) A patient with sight only in one eye is referred for management of glaucoma. She has high pressure on maximal therapy and full discussion of surgical options takes place. A Trabeculectomy is done and her AC shows central shallowing with mildly raised IOP. She tells you that previously surgery in the other eye was complicated and she lost her sight because of this. What is your management initial management plan?

6) A 36-year-old gentleman with PDS was referred from a peripheral hospital with MD of – 26, pressures of 46mmHg in both eyes on maximal treatment. He underwent a trabeculectomy and one week later his pressure was 25mmHg on steroid drops alone. 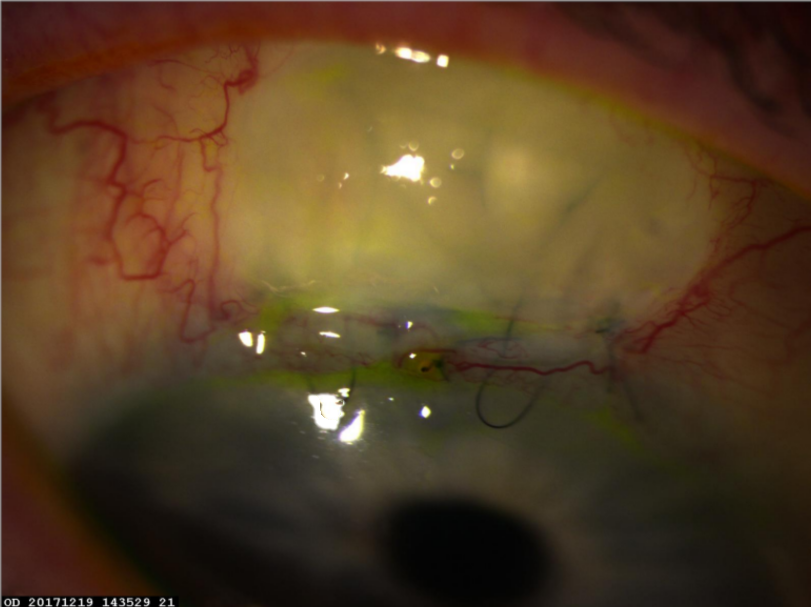 (Picture from GJ patient with PDS)

Which of the following steps is most appropriate?

7) A 70-year-old lady went to an optician and was dilated for a fundus check. Unfortunately, she went into iatrogenic angle closure and had emergency YAG PI attempted by the Glaucoma fellow in casualty. In the RE the pressure remained elevated
and the iridotomy was extremely difficult to logistically perform. The decision for lens extraction was taken. What precautions should be taken when performing this cataract
surgery?

8) Simbrinza® has been approved by NICE to be used in patients with glaucoma. I personally use it in advancing GON and have found it invaluable in this sub-group. The two active ingredients are brimonidine and brinzolamide. What is the mechanism of action for IOP lowering in the latter?

9) A 49-year-old patient was assessed in casualty by a trainee doctor. She was referred in by her optician with raised pressures and examination revealed:
– Open angles with generously pigmented TM. Sampaolesi’s line was present.
– IOP of 35T30
– CDR of 0.5, 0.3
The patient was started on Monopost® nightly. By the time I saw her in clinic, she had read up on treatment options and was keen on trying SLT. Which of the following is a negative predictor of SLT working in her?

10) In a patient with a functioning Trabeculectomy, which one of the following drops is least desirable?